Biogill is an Australian company established in 2009 with the aim of commercializing a technology developed a few years earlier by ANSTO, an Australian organization specializing in nuclear research, based on the interesting property of some ceramic nanomaterials that acted as an exchange surface, during the construction of synthetic rocks for the storage of radioactive waste. Around 2010, the first demonstrative projects in the field of wastewater treatment were developed and a couple of years later the technology was already consolidated both for the treatment of wastewater of shopping centers and for the reduction of the pollution load contained in the wastewater generated from breweries, wine and spirits processing industries, as well as food industries.

The technology takes its name from the gills of fish because, as it happens in many of the aquatic animals where oxygen is transferred from the water to the organism of the fish, in the case of Biogill, the gill represented by a lamellar surface of nanomaterials, acts as an exchange element capable of amplifying the transfer of oxygen from the atmosphere to the microorganisms responsible for the purification process. This particular system also allows for a significantly lower production of biological sludge than traditional biological processes. 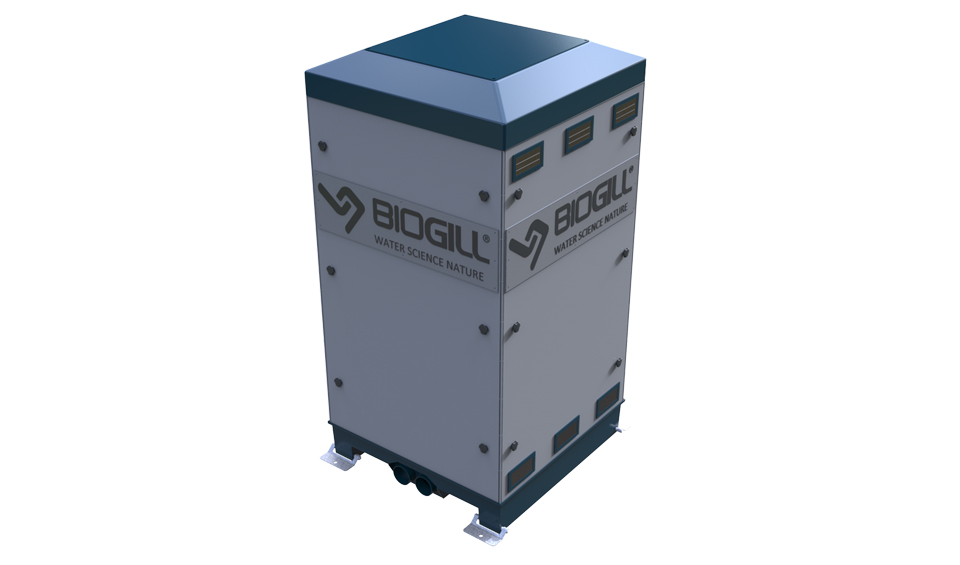 Biogill Tower Plus is the plug & play solution that includes the Biogill Towers required for the process, the pumps and tanks  for the the recirculation/distribution system and the electrical control panel of the system.

This solution is ideal for small installations where the customer requires minimal time for the construction of the plant and limited space is available.

Biogill Ultra is a completely prefabricated solution designed for small applications (15-60 m3/day) both in the commercial/municipal field and in the F&B and brewery industry where COD loads can be both significant and discontinuous in the time. The Biogill elements responsible for the biological treatment process are housed within the reaction tank, while the skid containing all the electromechanical components of the system is connected separately.

At the exit of the Biogill Ultra, the installation of a secondary settler is required to collect the sludge generated by the process to be sent for disposal.