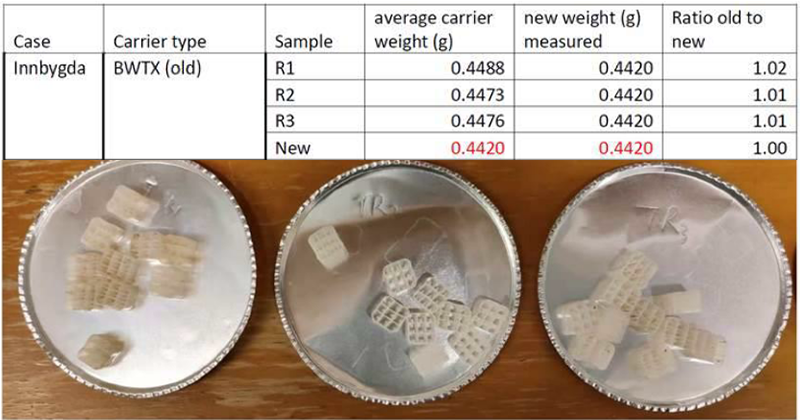 Have you ever wondered what the duration of the carriers used in MBBR and IFAS applications could be?
Recently our partner Biowater Technology AS conducted an in-depth study analyzing several biomedia samples taken from the MBBR plant of Innbydga in Trysil, Norway, which has been operational for over 10 years with the same type and quantity of carriers installed in the start-up phase: the BWTX model with a protected area of ​​650 m2 / m3.
A carrier sample was taken from each of the 3 different process stages, namely R1 pre-denitrification, R2 carbon removal and R3 nitrification. As can be seen from the photo, the carriers were analyzed after washing and drying , weighed and then compared with a sample of the same model that had just been produced. The results showed that the integrity was still perfectly preserved, the average weight of the carrier used has a completely negligible deviation that doesn’t impact performance in any significant measure and that in the same way its geometry and conformation were unaltered compared to the sample which had just been built.